It would seem the planets are aligning this month (literally). After a brief and uneventful embargo, SOS ’11 judges Zarzuela, Annimol, and ShutUpAndKnit

selected my hasty little DIPper to be one of the featured patterns for Summer of Socks 2011. And I finally got the photo I wanted of the hitherto unseen sock, now written up as a pattern and named Summer Spirals. 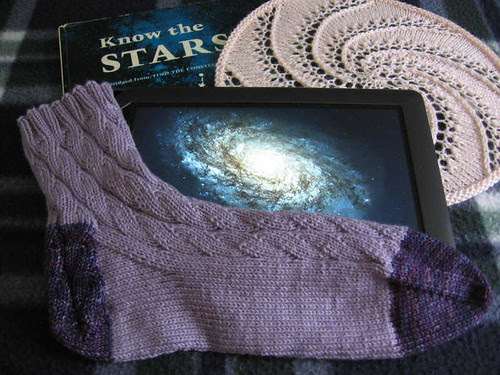 Summer Spirals had its origins in the observation that little cotton socks are perfect for summer evenings spent under the stars, yet many otherwise intrepid knitters have never attempted them. To help remedy that, the pattern provides a low stress introduction to cotton sock knitting. Its design showcases the superb stitch definition and beautiful drape of cotton yarn and adjusts for the fiber’s relative lack of elasticity. It’s my modest effort to expand the knitting universe.

Pattern 60, a traditional lace stitch pattern with a multiple of 12 sts, has a nice structure for cotton yarn. But m12 is an awkward horizontal repeat for a sock of many sizes, so I scaled down the pattern to a more versatile multiple of 8 sts and modified its appearance to emphasize the faux cable. 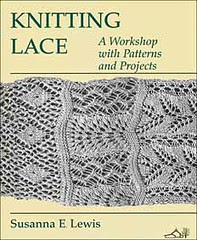 The three results give a cotton sock just the right amount of texture without adding excessive bulk, and allow for knitter's choice.

Many old lace stitch patterns produce significantly biased fabric, and so too the spiraling children of Pattern 60. Bias ribbing can give a cotton sock a flattering fit that compensates for lack of elasticity in the fiber, but too much bias can complicate working the garment. For this reason, the sock leg is kept short, which not only limits the amount of off-grain distortion but also makes sense for a summer sock. It's still the regulation three inches specified for a past SOS. 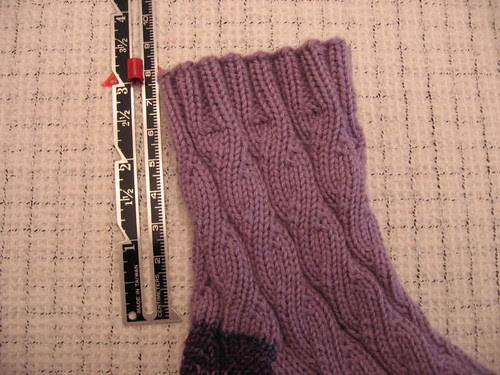 The stitch pattern is continued on the heel flap to avoid the bulk of a slip stitch heel. As a bonus, the pattern stitches form an elegant undulating edge to the gusset. I worked the heel flap and toe of the sample sock in contrast yarn because I was worried about Not Enough Yarn, but I rather like the effect. I'll call it a design element. The heel flap and gusset also place the ease of the sock in its construction rather than in its fiber. 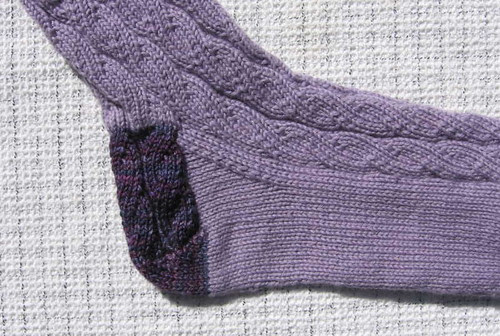 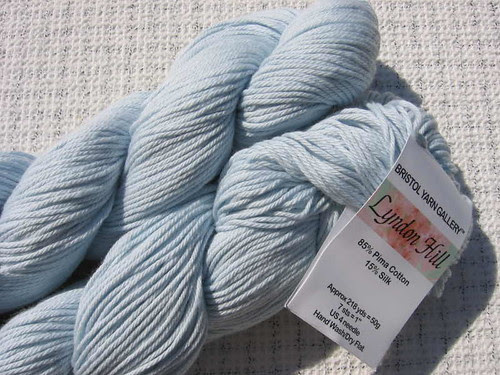 Conversely, I would tend to avoid heavily mercerized cotton (eg, perle cotton), which can knit up remarkably densely. A heavy cotton sock is traditional in some cultures, but I dislike them. Some knitters may find that socks knit from cotton-acrylic blend yarns make their feet sweat; others may tolerate them well.

As for colors, solid yarns and yarns with long color runs, including self-striping yarns, make the faux cables pop; variegated yarns with short color runs tend to reduce the stitch pattern to a sense of movement in the fabric, which can be a pleasing effect, but may be too subdued for many knitter's taste.

Finally, for a bit of summer fun, summer astronomers may enjoy using a stargazing app, an online guide, or one of the whimsical print guides by H.A. Rey, such as Know the Stars pictured above. Remarkably, astronomy is a science in which amateurs can do important work – it's a big sky out there.
Posted by Ina at 7:39 PM

Lovely pattern, thanks for sharing with SoS11 knitters.
Also a good discussion of the pattern and construction, which was helpful since I was debating making the leg taller, but now wont.

I love this pattern. Bought it from you through Ravelry. I am off to buy yarn, but have one question. What size shoe are you relating to your xs, s, m, l and xl sizes? I'm knitting these for my friend who has a size 9 foot.

thanks and happy sock knitting!

Please excuse this post if it is a repeat....
I LOVE this sock pattern and am off to buy yarn right now. Just one question....what sizes relate to your xs, s, m, l and xl? Thanks!