Oh hai. Happy... Halloween? All Saints Day? Where was I? Right, canning along and dealing with an abundance of pits, which made August, September, and October fly by bloglessly. I missed the U.S. Open. 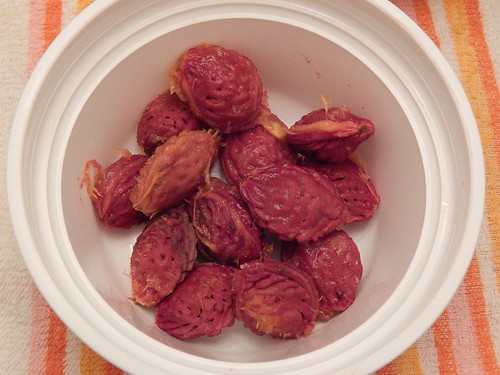 I missed Rhinebeck. While that's a sadness, there may be consolations. As gentle readers may know, when life gives you pits, sometimes that implies peaches or possibly cherries or possibly both, which is not so bad. But other times it's just the pits.

So. Back in August I canned peaches. The FIJ August Challenge was a twofer, low temperature pasteurization or steam canning. However, as both challenges require specialty equipment, impecunious renegade that I am, I just chugged along hot-packing peaches. It wasn't a good year for peaches, too cold during critical bloom times during the spring and too wet, flooded, and overcast when the developing fruits needed sun. Out of the various peaches I tried this summer – from New Jersey, Maryland, Virginia, and North Carolina farmers markets – NJ peaches were the sweetest, which ordinarily is not the case.

Prepping peaches for canning requires blanching and peeling, slicing (halves and even quarters seemed too big, I tried sixths), then simmering until hot in canning liquid. It was a surprise to see that blanched, peeled peaches retain a lovely blush... 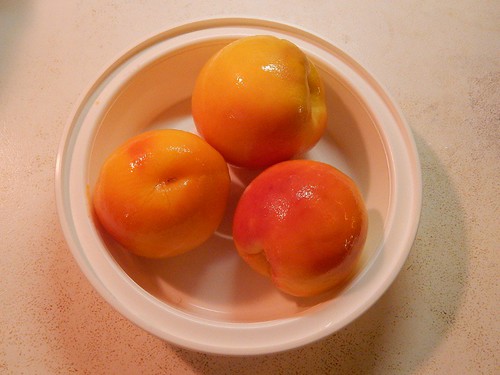 ... that vanishes with simmering. More accurately, the slices lose their blush, but the canning liquid takes on a pretty pink tinge that eludes my poor digicam. 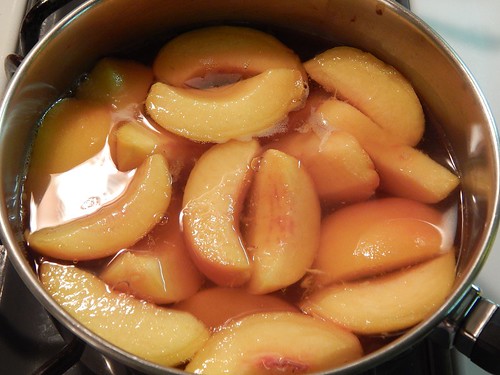 For canning liquid I tried recipes that use apple juice or heavy syrup (in the Ball Blue Book). My plan was to be able to eat the peaches and drink the juice, but some of the hungry peach-eaters at casa Jersey Knitter greatly prefer peaches in heavy syrup because they find juice pack too acidic. I wonder if a touch of honey would help smooth that out.

Processing is straightforward. I had some trouble with syphoning and fruit float, then read the former is caused when the contents of jars are either too hot or too cold relative to the water bath, especially with larger jars, and the latter happens when the specific gravity of the fruit is less than that of the canning liquid. Adjust accordingly. Eureka! (Alas for the peach-eaters, I think that means light syrup is more appropriate.) 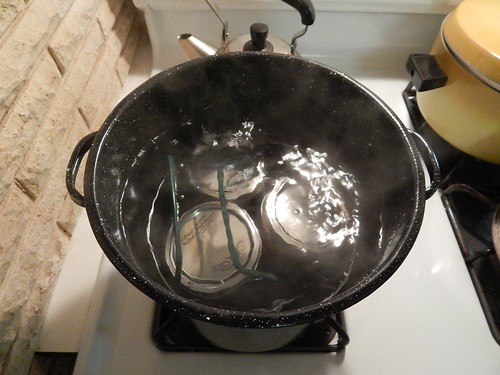 The results were very good, far superior to store-bought canned peaches, which encouraged further production. Also a certain amount of backwards progress when the hungry peach-eaters helped themselves to the peaches in heavy syrup. For quality assurance purposes, of course. Only one heavy syrup pack jar made it to the class photo. 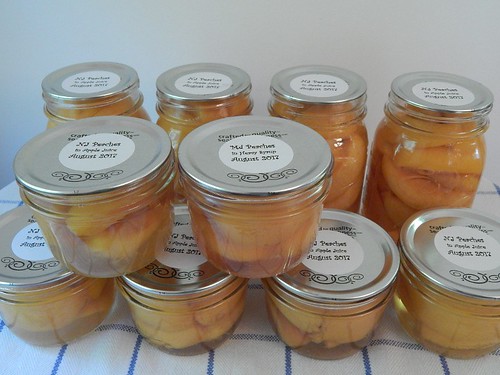 That is the most canning of one thing I've done so far, but not enough to see casa Jersey Knitter through the dearth of fresh peaches. I'd hoped to continue canning peaches through September, but the knowledgeable farmers market dude told me there's a magic moment that usually happens around the third week of August when peaches still look good, but no longer taste good. I'd never really noticed, but that is exactly what happened. Then other things happened, I was away a lot, and missed the FIJ September challenge, fruit butter, altogether. I was looking forward to trying a recipe for tomato jam... although this hasn't been a great year for tomatoes either, at least not in my tomato patch. Ah well.

I knit a loud sock for September Sockdown and was disqualified for being inattentive to the rules. Shrug. My DQ sock is a modified version of Socks on a Plane, and indeed was knit on a plane, and on trains and automobiles, too. Progress has been the opposite of speedy. I've been using a counting thread to keep the 3x3x7 cable crossings correct. 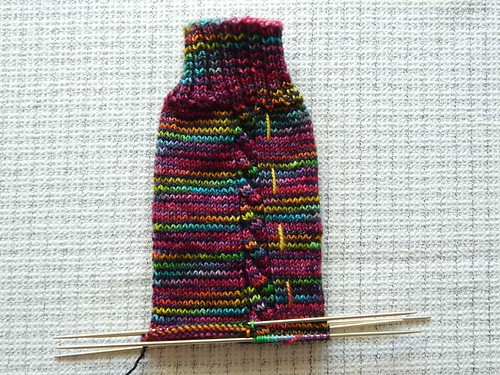 Carole fortuitously reminded me I had a bag of pitted Bing cherries in the freezer, prepped and set aside during the surfeit of cherry season for a purpose now forgotten. I decided to repurpose them for brandied cherries (recipe in the Ball Blue Book), to be used in festive cocktails and boozy desserts, except I substituted Amaretto for brandy as I find almond more sympatico with cherries. Freezing and canning were not kind to the cherries' texture, but otherwise the boozy cherries are incredible – sweet, dark, and quite alcoholic, definitely a consolation for missing the FIJ October challenge (dehydration or pressure canning). Indeed, the canning syrup was so good, I canned the excess too. 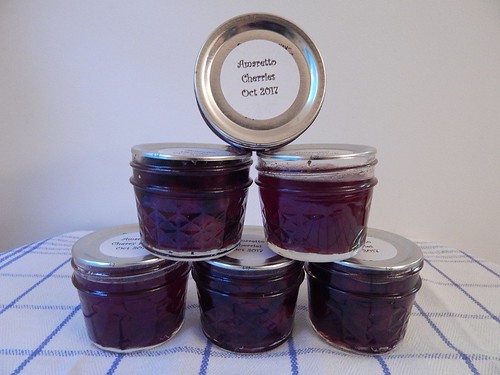 The trouble with any -along is too many inspirations/patterns/recipes, too little time. And boy howdy, do I have too little time at the moment. So let me just note these recipes (Fikira Honey Candy and Canned Lemon Curd) and the fond hope I can get to them later. November, November, that's how I'll remember!